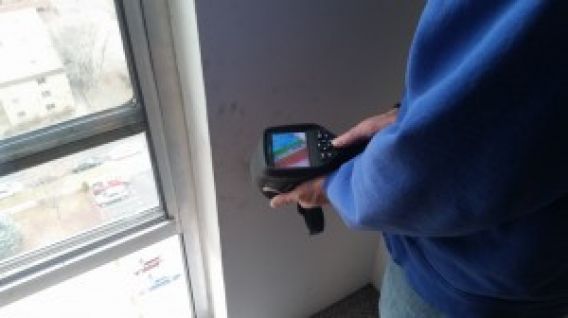 Usually high rise condo buildings do not allow owners to do any alterations to the building itself.  They usually can only decorate their space.  That’s why June’s case is so unusual.

June’s building told the owners 15-years ago that they had to replace their windows.  Can you imagine a building where each owner of each condo gets to choose their own windows?  What a hodge-podge that will look like!   But in June’s case there were way more problems than appearances.  One of the windows June chose 15-years ago leaked around the frames and the condo association wants her to pay for damages to the building – specifically to her neighbor on the floor below her (June is on the 18th floor).

June’s neighbor noticed water damages to her ceiling near the exterior wall.  The condo association sent someone to investigate and he concluded that the water was coming from a defective window in June’s condo above.  That’s when June called my radio show for help.

June felt the neighbor below was picking on her and the condo association was helping the neighbor make a case.  “How could they know that it is my window leaking?”  She asked.

I sent my chief investigator and Co-host Marc Mager to find out what’s happening.  Marc called Apple Aire (a member of my Referral List at ReferraList.com).  Why did we call an HVAC and home energy company to help in this case?  The reason is that Apple AIre does home energy audits to see where people wasting energy.  That audit includes “thermal imaging” (basically thermal imaging uses a special camera that can see “heat signatures”.  By using thermal imaging, owner Todd Terry says he can see exactly where cold air is leaking into the home or heat is leaking out in the winter.  And in the summer he can see the opposite.  In other words, it helps him track down air infiltration and exfiltration (drafts).

So, back to why we called Apple Aire to use the thermal cam … the images can also trace water leaks behind walls and in floors because water is cool and shows up as a blue streak.

Todd used his thermal came to examine June’s window and Todd felt, beyond a doubt, that there was water leaking into the unit under June.  While it wasn’t the news June wanted to hear, at least she felt better knowing the truth that she wasn’t being falsely blamed.

As it turns out, that particular window was not installed or maintained improperly. The weep holes put in the track for water to drain out were plugged up with caulk causing water to accumulate and seep into the walls.

By the way, because the windows were installed 15-years ago, there is no warranty and according to our attorneys, all statutes of limitations have expired for going after the contractor.

Our thanks to Apple Air for clearing up the mystery for June.